We don’t always get the feedback we’d like. Several reasons for that. Limited volunteers to conduct follow up. Some clients frankly don’t “get better”. Others don’t let us know what’s happening.

Lately we’ve heard several good updates though. This is one of them.

Back in July we gave away this 2005 Honda Civic Hybrid to this husband/wife couple. They were living in the middle of the country in Spotsylvania county in the travel trailer below. They had gone through some real setbacks in life. They ended up “stranded” away from potential places of employment. They couldn’t easily even get to a store for essential grocery items. They couldn’t get to medical facilities for essential treatments that both of them require.

The car started a chain reaction of good things in their lives. He was able to get a job in Short Pump at a Wegmans. Long drive to go to work but at least he had a job. They reveled in the first paycheck. They were able to buy some of their favorite foods.

Early one Sunday they were headed to first service at their church. She insisted. On the way to church, she became non responsive. He was able to take her to the ER where, in his words, they saved her life. Without the combination of their desire to go to church and the car, he says she would’ve passed away.

His “conditions” which have hindered him include some issues with anxiety. He’s (in her words) directionally challenged. He gets lost a lot when out driving. She mentioned needing a GPS. One was gifted to CRM and passed onto them.

They’ve since moved to Ohio. He has a job there where he has quite a few people working for him.

The lovely picture of the steps to the townhouse is their new home in Ohio. Life isn’t perfect. They still have their medical and mental issues with which to struggle, but they now have practical “helps” which have set their lives on a new course.

They call the car “GG” (gift from God). He polished (and continues to polish) that car to a high luster. She says he takes better care of the car than he does her (she’s joking. Mostly. We hope.)

They sometimes come up on Facebook. There’s not enough information here to identify them. (We value their privacy). But we also want to tell the story of how donations and involvement in CRM activities are making a REAL change for the good in people’s lives.

Finally. And this one is simply incredible. This same couple has sent cash donations to CRM from each paycheck they’ve received. We’ve asked them not to, but they don’t listen to all that we say. 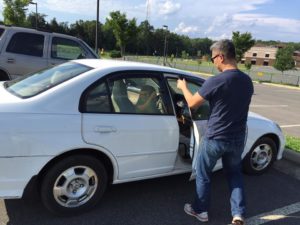